The town of Arusha, Tanzania is the country’s safari capital located in the north of the country. It has a population of 427,185 (2005 Est.). The city is located on a plateau in the Great Rift Valley amidst the Serengeti plains, Ngorongoro Crater, Lake Manyara, Tarangire National Park, and Mount Kilimanjaro.
Arusha is a small town nestled in the shadow of Mount Meru with commanding views of the mighty Mount Kilimanjaro.

Although Dar es Salaam is larger, Arusha tends to be visited more by tourists as it is the gateway to the northern safari circuit. It is likely to be the start of your adventure to the famous parks of north such as Serengeti, Lake Manyara, Tarangire National parks and the famous Ngorongoro crater.

Because Arusha is located by the foot of Mount Meru, yearly temperatures range from 13 degrees to 25 degrees Celsius between the wet and dry seasons. Due to Arusha’s altitude, dry air is prevalent. Arusha experiences an eastern prevailing wind from the Indian Ocean, a couple of hundred miles east.

Getting to Arusha – Tanzania
As a premier tourism and event destination, national and international access to Arusha City is easy. Kilimanjaro International Airport (KIA) is located in the east of Kilimanjaro Region is a 45 minutes drive to Arusha City. There are Local and International flights almost every day which include, Precision air, Kenya Airways, Ethiopian Airline, KLM, Air France, Uganda Airline, Rwandair, South African Airline & Qatar airways (To be operated from 25th July 2012).

Between the Airport and Arusha City, transfer service is readily available by the Airlines busses, Taxi, or Car Rental companies. The Organizing Committee and AICC Protocol team will arrange airport pick-up and drop-off for those participants who have communicated their travel plans in advance and are staying at the designated hotels as agreed. In case of missing the planned transport schedule Taxi’s are located outside of the domestic and international terminal and are approximately US$ 50 to Arusha City.

Accomodation
With a room-capacity of about 3,000 within the radius of 0.4 to 25 KM’s from the Centre, Arusha town provides a wide range of accommodation and restaurants at international standards. Rates vary to suit different tastes and pockets; your delegates will find any category of accommodation in Arusha with the choice ranging from small, quaint guest-houses to the equivalent of Five-Star Hotels.

Medical services, Recreation facilities, places of Worship, International courier services, Postal and Banking, Bureau de changes, Shopping arcades and many other facilities are available within the Centre or in town.

What to do
Besides attending your conference at AICC you can opt for Game drives, forest walks, mountain biking, canoeing, numerous picnic sites; three or four-day Mount Meru climb – good acclimatization for Mt. Kilimanjaro. Arusha National Park’s lakes, forest and Ngurdoto Crater can all be visited in the course of a half-day outing at the beginning or end of your stay. Other activities in and around Arusha include Cultural tourism & visiting of different places like Museums, Maasai Markets, and Cultural Heritage & Local markets. 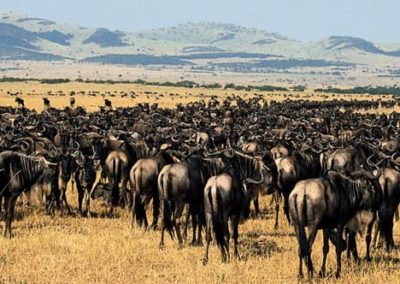